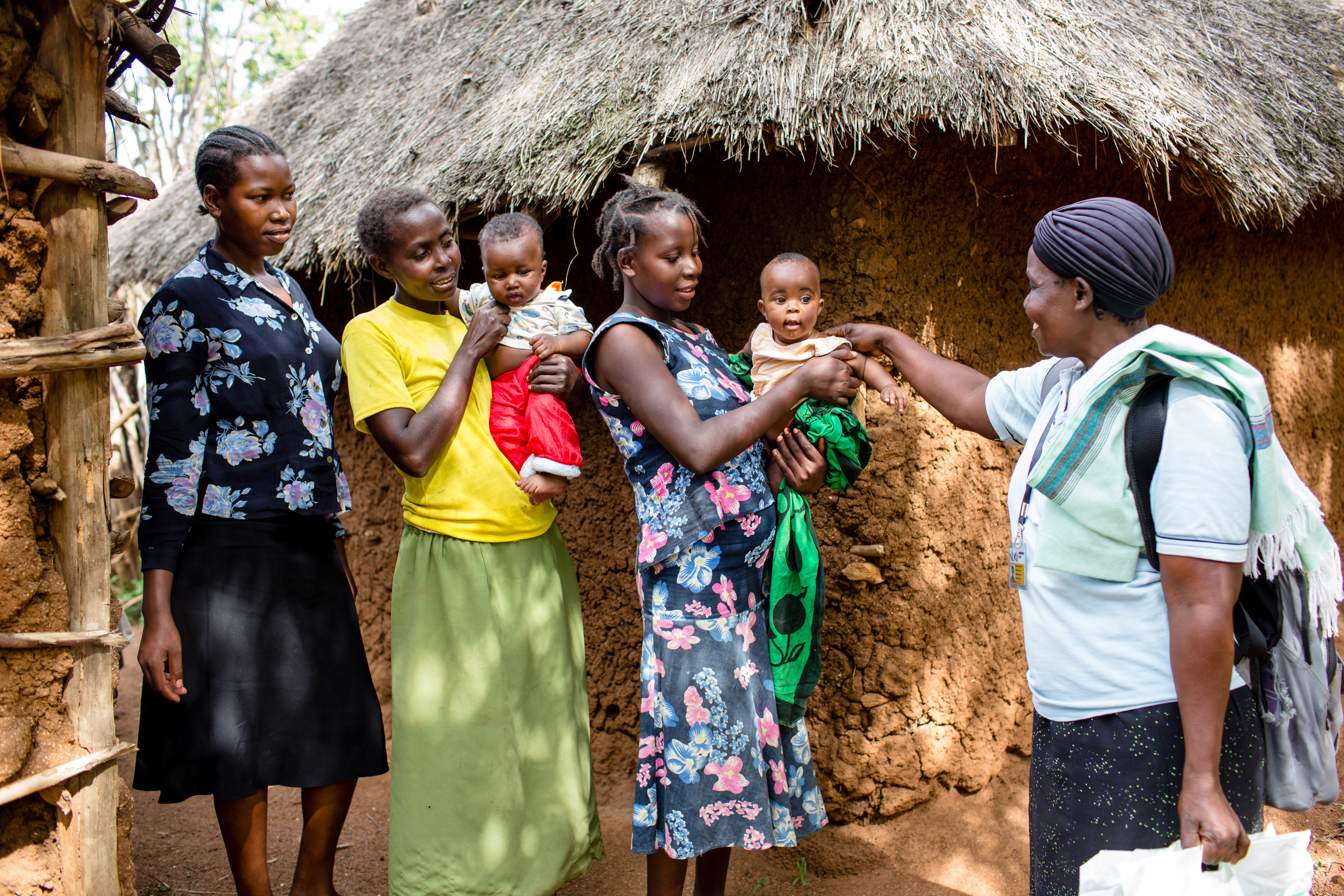 This year, an event was held the first week of August at Kehancha Level IV Hospital in Kuria West Sub-County with the theme of empowering parents and enabling breastfeeding. Over 150 mothers, both expectant and those with children under six months, attended this year’s event, and they learned about the importance of exclusive breastfeeding for the first six months of a newborn’s life. According to UNICEF, “Improving breastfeeding practices could save the lives of more than 800,000 children under 5 every year, the vast majority of whom are under six months of age. Beyond survival, there is growing evidence that breastfeeding boosts children’s brain development and provides protection against overweight and obesity. Mothers also reap important health benefits from breastfeeding, including a lower risk of breast cancer, ovarian cancer and type 2 diabetes.” (UNICEF)

A healthcare group member of Kehancha Farmers Cooperative Society supported by Nuru Kenya, Suzanne Muruga, a mother of four, attended the event and learned about the importance of exclusive breastfeeding. As she shared about her experience, she cradled a three-month-old in her arms–a baby that looked well-nourished, healthy, and lively. Suzanne attributes this to her nutrient-rich breastmilk, and she intends to continue breastfeeding her baby exclusively until graduating to appropriate complementary feeding.

Suzanne shared how some cultural beliefs and practices make exclusive breastfeeding a major challenge for new mothers. According to her, there is a widely-held belief that the mother’s milk isn’t enough for the baby. She also iterates that some breastfeeding mothers do not get time for exclusive breastfeeding due to barriers like demanding careers, household chores, and farming activities. Attending this event solidified Suzanne’s learning base from her participation in a local care group and it reinforced the need to prioritize breastfeeding for her newborn despite the obstacles she may face. 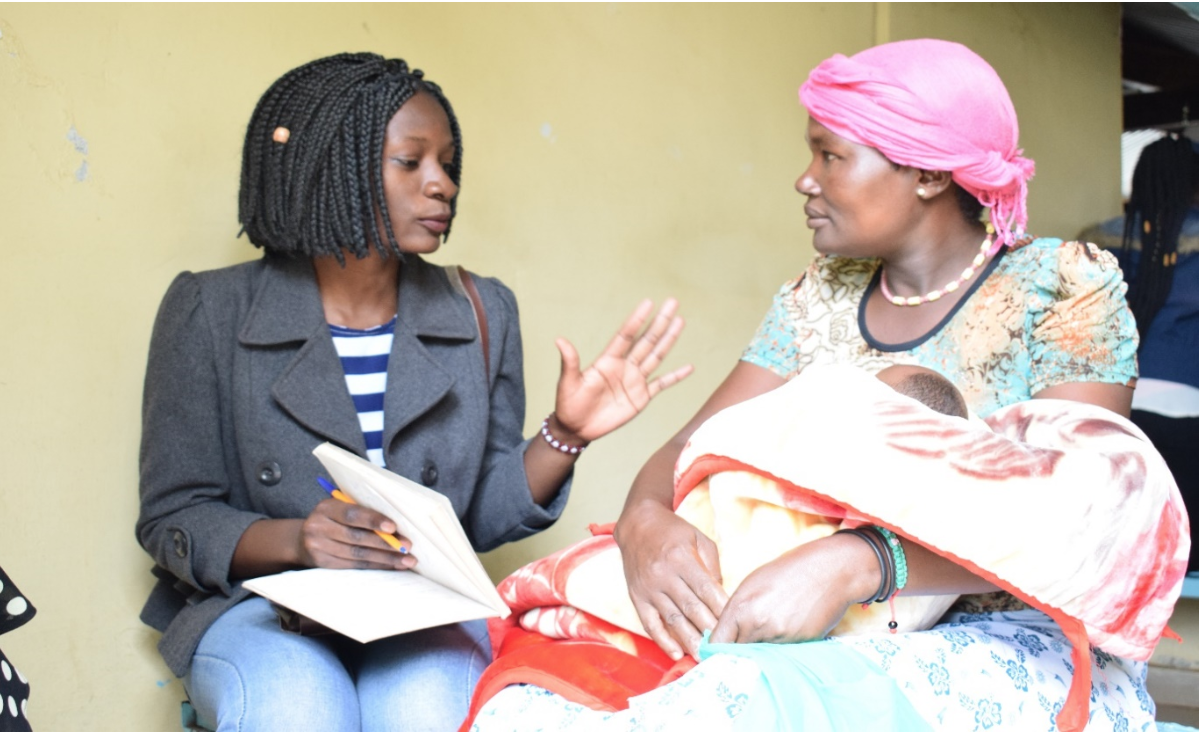 In Nuru’s healthcare program in Kenya, we implement a care group model to support mothers in preventing maternal, neonatal, and newborn diseases and deaths in Migori County. Care groups give key information for prioritizing life activities, providing space for women to coach each other on how to overcome roadblocks to adopting healthy behaviors while creating an environment of supportive accountability. All of this is led by women farmers, selected by their peers as health volunteer leaders. They are trained by Nuru in Care Group methodology to facilitate behavior change. Key topics include safe pregnancy, childbirth, infant care, nutrition, and hygiene.

Through these groups, there has been an increase in both knowledge and practice of healthy behaviors. Exclusive breastfeeding has significantly improved from 53% to the current 99% over a five year period of time based on an internal survey. Attending at least four antenatal care visits has increased from 79% to 100%, effective handwashing practices has improved from 45% to 97%, drinking safe water from 82% to 95%, and immunization from 79% to 98% over the same period of time.

Nancy Brekny Moronge, Mother-Child Health Department Nursing Officer, acknowledged the role that Nuru Kenya has played in reducing preventable maternal and under-five child diseases and deaths through its support of families to adopt and maintain targeted healthy behaviors. She noted that most local first-time mothers had no knowledge about exclusive breastfeeding prior to Nuru Kenya interventions.

“Mother-child healthcare in Kuria Sub-County has improved over the last five years in regards to exclusive breastfeeding. Although much has been done, there is still a gap that needs to be filled towards achieving the maximum outreach since most mothers are still not aware of the benefits that come with exclusive breastfeeding,” she said.

Healthcare Program Manager—Prior to joining Nuru Kenya, Victor served as a a Public Health officer with the Ministry of Health where he led the Community health workers and natural leaders in implementing community health strategy. He has wide experience in water sanitation and Hygiene activities, home based care and support for people living with HIV in the community and maternal and child health. Victor has a bachelor’s degree in Environmental Health Science from Makerere University, Uganda, and certificates in Epidemiology and Biostatistics from the University of Washington/University of Nairobi, and in Project Planning and Management, Dynamic Leadership, Financial intelligence from World Vision.